LUMAS uses cookies to improve your experience on our website. If you continue, we assume that you consent to receive all cookies on all LUMAS websites. Read More
More works by Mikhail Kirakosyan
We Are Like You 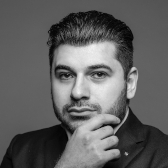 The gracefulness and strength of lions, elephants, and gorillas have always been fascinating. But in the works by Mikhail Kirakosyan, we get closer to their fascinating personalities. The animals communicate directly with us. Their striking facial features reveal their genuine emotions. An immediate connection is built, along with the… Read more

Introduction
The gracefulness and strength of lions, elephants, and gorillas have always been fascinating. But in the works by Mikhail Kirakosyan, we get closer to their fascinating personalities. The animals communicate directly with us. Their striking facial features reveal their genuine emotions. An immediate connection is built, along with the feeling that boundaries between man and animal are shifting. Kirakosyan’s series opens the door to an animal encounter with an intensity and intimacy like never before.


In 1872 the revolutionary naturalist, Charles Darwin, published a book about the facial expressions of humans and animals. The book revealed how often animal expressions resemble those of human expressions. At the time, these similarities were a sensation. Today, they’re the blueprint for Mikhail Kirakosyan's series We are like you. By applying Darwin’s concept to his art, the Russian photographer created profoundly expressive photos that mesmerize viewers.
The series was created at the Moscow Zoo, a site deeply steeped in history, established in 1864 under Tsar Alexander II. There, the photographer had a tremendous variety of subjects and ample opportunity to find subtle, yet distinctive, facial expressions. Kirakosyan made the most of zoo’s pandemic shutdown. Hours upon days were spent wandering the 21.5 acre zoo, in front of the cages and the open air enclosures. Along the way he developed a very personal connection with the animals that live there. When the gorillas were worried, Kirakosyan worried with them. When the elephant joyfully threw its trunk in the air, he rejoiced.


Kirakosyan studied architecture at the Moscow State University of Civil Engineering. As a student he was fascinated by the beautiful historic buildings he encountered, as well as the architectural drawings. This enthusiasm eventually developed into a great passion for art, particularly photography. Today he is an internationally renowned photographer who swears by his Leica S system and serves as president of the Leica International Photographers Club. His artworks are collected and exhibited all over the world, with publications that cover a vast range of topics.

My interest in art was developed from the early years, still I had no wish to see objects of art, to study or to visit galleries. My wish was to create on my own at once, to make something in my own way, to prove myself and my view of the world. Fortunately, such an infantile approach led with time passed to awareness of the need to study art craft. When I realized that any attempt to create on its own, without knowing the art history and the masterpieces of the classic artists lead to an impass, I started to study.
Since I’ve started my career in photo art, ten years of the sixteen were dedicated to studies. I studied the basics, I took courses in academic drawing, sculpture, photo art basics and composition. I’ve read a lot of books and have looked through many masterpieces already created.
The basis acquired not only made my success as a photo artist possible, but gave me an opportunity to be a teacher also. I started teaching photo art, helping the novice masters, as well as helping the skilled photographers to develop their own style, to choose the correct coloring decisions, to adjust their shooting manner, to gain the outstanding results.


How did it all begin? How would you describe your work process?

It’s for five or six years, since I’ve reached the professional international level, that I started to pay more attention for planning my own projects. The first step is to answer itself two main questions:

1. Why to start shooting? What could I express with my artwork?
2. Who would be interested in the project? Where would it be published?

I’m sure there is no sense in losing time for useless projects that wouldn’t resonate and awaken genuine interest. My aim is to show art everyone, not only professionals in the photo art field.
I want my works to be available for evaluation by people of different occupations, ages and social strata. No matter if they won’t be able to evaluate the complexity or originality of the snapshots. The point is what emotions are awaken thereby. Anyone can judge whether the picture is good and evoke a response, there’s no need to be a professional.
In addition, I’ve made a decision to work with photo series. No matter how talented a photo artist is, it’s impossible to feature with a single snapshot everything desired – conceptions, thoughts and feelings. A photo series is more convenient and effective in this regard.
Herewith, every single picture of the series must be extremely self-sufficient and convey the whole range of the conceptions the project is based on. The rest of the snapshots should enhance the effect.
If one expects the communication with his viewer, with a person interested in art, the series must be preferred. Moreover, major projects attract more attention, making one’s art distributed in the widest possible audiences.
I have solid reasons to make such statements, since I’ve implemented in the recent years several major projects widely resonated and awakened a great interest. Here are some:
1. “Monumental geometry” project (2018 – present). Genre: architectural photography. Herein I tried to show contemporary Moscow from the point of view of an artist with an architectural background.

2. “The Moscow Zoo: Lockdown” (2020). A social photo project, within which the life of the Moscow Zoo inhabitants during the lockdown period was shown. In the absence of the visitors animals behave more naturally, get the care required and love of the Zoo staff, but still miss human attention a little.

3. The Fans of Russia World Cup 2018 (2018 – 2019). The project, within which I have shown Moscow while hosting the FIFA World Cup 2018, is focused on the fans. They have brought their unique national energy with them, filling the streets with bright colors, and have thus created a real sports festive atmosphere. It’s them who have become the protagonists of the project and attracted the closest attention of the public. I have later, in 2019, performed the exhibition of these photo works in the Moscow Armenian Embassy and published a photo-book with the best snapshot included. The pictures became a part of the Archive fund of the Museum of Moscow.


Who inspires you? Which artists/works of art are you particularly impressed with at the moment?

My work is predominantly based on the classic art, whatever it is: cinematography, visual arts, painting, photography etc.
The sources for my inspiration are different. When I first came to Moscow LUMAS Gallery, I was greatly amazed by the artworks I found there. They caused the so-called “wow-effect” and astounded with their expression and aesthetics. Since then, I dreamed of once being found myself on a par with the artists, whose works I had seen.
If I considered the question of acquiring artworks, there is no doubt I would prefer those of LUMAS Gallery photo artists. The choice would be actually very hard to make: there are too many works of the highest level, whereof it is impossible to single out one or more.

I suppose that the main distinctive feature of a good work of art is the ability to make you buy it and take it home. We can talk of a really good succeded artwork if one wants to purchase a photo, spending his own money, to hang it on the wall of the bedroom or the study and admire it every day.
The highest achievement in art is when your works are in demand.


What project are working on at the moment?

My rules forbid me from revealing my own future plans. The photo art community is fiercely competitive, so voicing your ideas is shortsighted. I can only mention a bit one of my projects already worked out in detail, which is about to be implemented in the near future.
The project is on butterflies. I managed to get access to a rare collection and I’m planning to start working soon. I will not disclose details, for there is always a skilled and proficient photo artist who would implement your idea.
I have never been afraid to share my plans before, but it hasn’t done any good. Fortunately I’ve been given a good advice not to reveal any details of the project until it’s done. So, now I speak less, work more.

As for me, I think art should be filled with emotions and be able to teach people. Unfortunately, many of masters of contemporary art deviate from classical canons, break the composition rules and often don’t know themselves the way they are working. The result is the that the artists make artworks in many ways inferior to the classical masterpieces.
Of course, someone might like their works. However, art should not just be liked, it should teach and educate a person, expand his inner artistic world, show the thoughts, emotions and feelings the artist revealed through his artwork.
So, as I see it, education is the main purpose of art.

Having achieved certain recognition in art/photo art world, one reaches the level which is must be maintained in future. Moreover, every new project should be more interesting, more complex and more exquisite. This is the way you prove your skill, go further and create something new constantly.
It is that process that makes an artist happy. Being creative, making something of high quality is the thing bringing about happiness.
When the project is done and you start to get laudatory reviews, watching the public and media feedback, you come to know everything is done good and properly. There is no happiness here, but the feeling satisfaction of the fruits of the work done, of time and efforts invested in creative act.